Can someone offer a tip or two about Open ID? I can’t figure out how to get one, or what mine is if in fact I already have one. I thought it was just the Letter T’s URL plus my WordPress password, but that doesn’t seem to be working. Please advise! 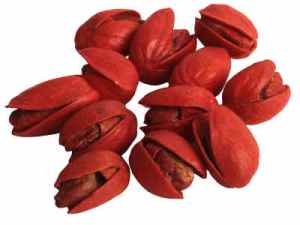 Please excuse the rather banal nature of these last few “demi-posts.”  It’s just that I haven’t had time to craft an official post but don’t want to suffer a relapse of ablogorrhea.  I am currently waiting out the painfully slow process of uploading email lists to our e-marketing program.  I really can’t do much until the process is complete, so I thought I’d share two concerns that are now plaguing me.

At approximately 10:28 a.m. yesterday, I was enjoying a Greek yogurt/honey/granola parfait from Starbucks. Just as I finished the last bite, I espied the Google News headlines about the pistachio-related salmonella outbreak.

Phew! I am so glad I never eat pistachios! Salmonella totally sucks!

As I trashed the empty plastic cup that had previously contained my breakfast, I noticed something terrifying.

Frick on a nut-dipped stick!  What is that small, green, sunflower seed-shaped item clinging to the side of the cup?!

I began to hear the faint strains of the slow, foreboding music that always preceded trouble on the “Brady Bunch.”  The music grew more ominous as the reality hit me:  I had, in fact, just consumed at least a handful’s worth of the very nut that was caught in the maelstrom of public discourse.  I might even be Patient Zero.  OMFG.

But wait. There’s more.  Before boarding the subway this morning, I noticed with shock that, while there were no seats, of course, there was a reasonably comfortable amount of standing space. I secured a spot and was delighted that no one was exhaling garlic-breath directly in my face.

I thought too soon. A foul-smelling homeless man came stumbling down the aisle, holding a half-eaten Boston Kreme donut in one hand and a filthy-looking tissue in the other.  (In case you’re wondering, I did NOT try to bite into his donut, but I did think about it.)  You can guess which spot he chose for his commute downtown. That’s right — the same spot I was occupying. I tried to gently and subtly relocate, but was not able to do so on account of the the train’s rapid, bumpy motion.

Fine, I thought. I’ll just move at the next stop.

Unfortunately, there was enough time between 86th and 77th Streets for contamination to occur.  The homeless man, about to lose his balance after a particularly violent lurch, went to grab the pole with his tissue-holding hand but instead grabbed MY NAKED HAND.

I had intended to wash my hands — under boiling water — immediately upon arriving at work. But then I got sucked into the vortex of professional Twitter use and absentmindedly began to eat my yogurt-blueberry muffin.  It was a good few bites before I realized which germy, disgusting, filthy, amputation-worthy hand I was using to serve myself.

So I ask you, my loyal readers, this:  what are the odds that my death (and/or Ebola, and/or severe illness)  is not imminent?