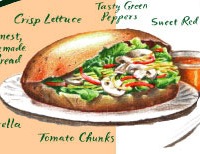 You may or may not have picked up on the fact that the six months I spent in Michigan with my ex-husband were not exactly the happiest chunk of my life.  Allow me to put it this way: one year for a human is seven years for a dog.  Similarly, one month in Michigan was an eternity for me.  So as far as I’m concerned, I spent six eternities in that craphole.

There were, of course, a few good things that came from my midwestern experience.  One was Ollie, the ginormous-headed Wheaten terrier we got from a breeder at the cutely named Raisin Tree Farms. Two was the availability of chipatis (pictured above) from Pizza House (conveniently located in both Ann Arbor and East Lansing).  Chipatis are really just shredded salad ingredients in giant pitas, but the accompanying condiment — a mysterious elixir of what I suspect to be salsa and ranch dressing — is dee-licious.  Three was the scrawny and kindly college student at Bed, Bath & Beyond on Washtenaw who suggested I watch a new show called “Family Guy.” But honestly, that’s about all I can say without cursing.

My geographic frustration began right away. I arrived in Michigan from New York at the end of July, and it was already cold.  I felt like a member of the Donner party, realizing too late I wasn’t going to make it — the elements, circumstance and a series of poor decisions would triumph over my will.  On the second day of my creepy new life, I took the Jeep — which, by the way, isn’t the easiest car to drive when you’re five feet, no inches — and decided to seek solace in the extra-wide aisles of the local Meijer (pronounced like “Myer”) superstore.

I had no idea where anything was, of course, so very logically, I called Meijer to ask for directions.  The conversation went like this.

Hi, I’m coming from the depressing apartment complex on Eisenhower Boulevard.  Can you tell me how to get to your store?

WHOO! WHOOOOO BOY. I sher doon’t think I cane. I am so say-ree hon.  I just doon’t noo what to tale you.

Five-second pause on my end due to horrible realization that I now live in Michigan.

Oh. Okay. Well, how did you get to work today? Maybe that will help.

WHOO.  Ache-tually, may husbay-nd draped me off on his way to work.

Five-second pause as I see if there’s anything in the car I can use to hang myself at the next light.

Maybe there’s someone else there I could ask for directions?

HAAAAAAAAAAAAAANK! HANK! HANK! Theers a young lady on the phoon who needs day-rections. Cane you peak up?

Five-second pause as I process the fact that “Hank” didn’t merely deposit his wife at Meijer and continue on in his American car to another place of employment, but actually works there as well.

Whoo boy! I sher hope Hank cane tell me where the fuck May-er is, or I’m giving up and going to Tear-get.

Tales From the Tundra: Can’t Get There From Here